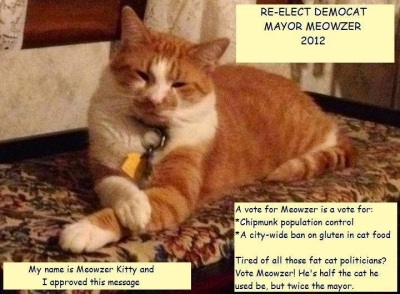 Mayor Meowzer McDermott Klapp of Meowzerville (formerly Whisker City- yes, that Whisker City) died peacefully at home on December 20, 2013, after a brave battle with rodent poison. He was born in June 2007 in Kent, Ohio and moved to Meowzerville on November 1, 2007. He was elected mayor in 2008 and governed Meowzerville after his re-election in 2012 until his passing. A life-long Democat, the Mayor will best be remembered for his chipmunk population control legislation and his city-wide ban on gluten in cat food. He successfully worked with Republikitties, Sniffertarians, Labratarians, Independepups, and Indepupdents.

Survived by his parents, Mark and Alanna Klapp; his tiny human, Gabe; and his brother from another mother and species, BFF Sniffer dog. He was loved by many friends and constituents and taken from us too soon.

Meowzer arrived on my doorstep at a time in my life when I needed him most, and he must have fulfilled his purpose, as much as that breaks my heart. He was loved by a lot of people, many of whom he’d never met face-to-face. In the end, the best thing you can say about a life, whether it’s a human or pet, is that it was a life filled with love. Rest in peace, little buddy.