I suffer from migraines, and along with magnesium supplements I’ve made an effort to eat more foods high in magnesium. I find magnesium-loaded foods to be helpful not only for prevention but to ease the pain during an episode (it may be all in my head, but there’s not one bad thing about a super food like quinoa, my favorite migraine-fighting food). Earlier this week a migraine (thankfully short in duration, about 5 hours) led me to look for a quinoa and red kidney bean recipe. I found this Quinoa and Bean Pilaf recipe on the Food Network and modified it for fun. At first I wanted to prepare it with some lemon pepper chicken, and when I started putting it together realized this is a protein-packed meal all on its own. Below is my version complete with photos. Enjoy, and if you try it would love if you left your thoughts and modifications in the comments.

2 tablespoons California Olive Ranch extra-virgin olive oil
2 bell peppers, 1 red, 1 yellow (the recipe calls for red and green peppers, and I think this would also be good with orange peppers)
6 scallions, sliced, separate the white and green parts (the recipe calls for 3 scallions but I love them so I went heavy on the scallions, no regrets)
2 stalks celery, sliced (I do not love celery and it’s easy for it to overtake a dish, so I went with the receipe here)
2 cloves garlic, finely chopped (I only had two cloves, otherwise would’ve used more garlic)
2 tablespoons Muir Glen organic tomato paste
Pinch of cayenne pepper
Kosher salt
1 cup quinoa
2 15-oz. cans of red kidney beans, drained and rinsed (I used organic kidney beans, and you can use black kidney beans if you prefer)
4 cups organic baby spinach (honestly I grabbed 4 handfulls of the stuff)
1/2 cup shredded white mild cheddar cheese (the recipe also suggested pepper jack)
Sriracha sauce (the recipe says its optional, but it tasted bland without it, and any kind of hot sauce really brings all the flavors together. I’m not a hot sauce lovin person, either.)

Heat olive oil in large skillet over medium-high heat (I love our cast iron skillet). Add peppers, scallion whites and celery. Cook and stir until soft, which will take about 5 minutes. Add garlic, tomato paste, cayenne and about a half teaspoon of salt (I actually used a little less). Cook and stir for about 2 minutes. Stir in quinoa, then add two cups of water and the kidney beans. 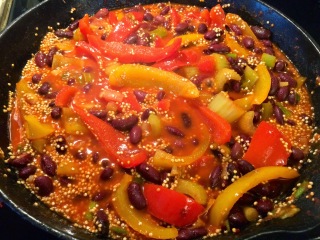 Simmer and cook, and stir often. You want most of the water to be absorbed and for the quinoa to be cooked through (should take about 15 minutes). The recipe suggests adding up to a 1/4 cup more of water if necessary, and I did need to add a little water before the quinoa was completey finished cooking.
Remove the skillet from the heat and add the spinach, then stir until it starts to wilt. The recipe suggests adding 1/2 teaspoon of salt; I went easy here and just added a pinch. Stir in half of the scallion greens and the shredded cheese. 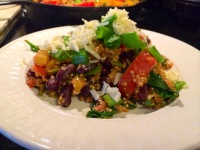 Place individual portions on plates and sprinkle the rest of the scallion greens and cheese on top.
Drizzle with Sriracha sauce and enjoy!

From the kitchen to your skin care routine, there are thousands of uses for coconut oil. It hydrates and moisturizes hair, skin and lips. Coconut oil is a fantastic natural all-over moisturizer (use it like lotion after bathing), and when combined with other ingredients, makes a great base for hair masks and lips scrubs. Here are two recipes to try.

The lip scrub recipe is courtesy of Brandie Gilliam, Founder and Editor-In-Chief of Organic Beauty Talk.

Mix ingredients. Use a toothbrush or your finger to gently apply to your lips with a back and forth motion. Rinse, pat dry and then condition with a bit of coconut oil for soft smooth lips!

I also use coconut oil on my infant to treat and prevent diaper rash and in a homemade teething oil.

Coconut oil is an easy, affordable and fun way to moisturize your skin, hair and lips. Do you have any coconut oil tips to share?