Freckles dotted her skin like punctuation on the chalkboard during an English lesson. She had thick, frizzy hair; the color and texture reminded me of Little Orphan Annie’s hair, curls unfurled. Her name was Miss Hudik, and my fifth-grade class was her first when she began her career at Center Road Elementary. She assigned a short story with illustrations. I wrote a tale inspired by The Red Balloon, an award-winning children’s film directed by Albert Lamorisse.

On a rainy fall day in France, Pascal finds a balloon, round and red. The balloon, which has human qualities, is a companion to lonely Pascal until his jealous classmates steal it. One of them hits it with a slingshot. Hundreds of balloons escape, fly to Pascal, wrap their strings around him like a harness, and lift him in the air. This is where the idea for my first story came from.

My character, Holly, flew in a red hot air balloon with a brown woven basket, despite her fear of heights. Various situations threatened to pop the balloon. She landed unharmed, a braver girl. I used 11” x 14” white paper, folded in half to look like a book, silver staples at the seams. I traced lines with a ruler, four to a page; I printed my best handwriting with a black crayon. Above the words, I drew a stick figure with yellow pigtails and blue eyes, the sun, clouds, V-shaped birds. When I wrote my name on the cover, I felt, for the first time, like a writer.

I remember the immense joy creation brought. I couldn’t draw but I didn’t care; the words were much more fun to play with than the crayons. Miss Hudik confirmed it for me; she told me I should write stories. I started to dream about books, real books, bound with spines instead of staples, my name on the cover. When adults asked me what I wanted to be when I grew up, I said, “An author.”

A red balloon inspired me to create; a red-haired woman encouraged me to continue. She gave me the guts I needed to write on my own. Miss Hudik was my last childhood teacher. She sent me into junior high, and the rest of my life, armed with the core of my identity: writer. 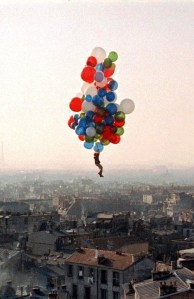 What you just read is an essay I wrote in 2005 that won second place in the Lea Leever Oldham essay contest. The late Lea Leever Oldham founded the Western Reserve Writers’ Conference, held each March and September at Lakeland Comminuty College. The topic in 2005: When did you first know you wanted to be a writer?

I invite feedback from everyone, and for the writers, an additional question….when did you first know you wanted to be a writer?